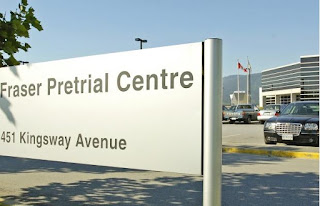 The Vancouver Sun is reporting that murder charges has been laid in the death at Fraser Pretrial August 3rd. The Surrey Now is reporting that "The man killed after a fight between two cell mates at Surrey Pretrial earlier this month has been identified as 25-year-old John Michael Murphy. The other cellmate, 22-year-old Jordan Cole Burt, has been charged with second degree murder, the Integrated Homicide Investigation Team (IHIT) announced Wednesday."

This isn't the first time this has happened. I'd hate to think a wrongful death suit has to be filed just to get better security in the prisons. The Jay Hall beatdown was sleazy. In February of this year CTV reported that "Officials are investigating after the second in-custody death of a prison inmate in Metro Vancouver this week. BC Corrections confirmed that a prisoner at the Fraser Regional Correctional Facility in Maple Ridge died on Saturday. The prisoner’s identity and cause of death have not yet been released."

"The incident marked the second death of an inmate in Metro Vancouver in the last three days. On Thursday evening, convicted Stanley Cup rioter William Fisher died in custody. Fisher had been in prison less than a week when he went into medical distress in the North Fraser Pre-Trial Centre, where he was waiting to be transferred to a federal prison. He was taken to Royal Columbian Hospital, where federal officials technically took him into custody. He died in hospital."

April 2016 Kim Bolan reported that "Another prisoner in a B.C. jail has been killed in a gang-linked attack. Neil Leslie died in hospital after he was beaten in a living unit at North Fraser Pretrial Centre on April 17. Another prisoner, Zachariah Pakarinen, 27, has been charged with aggravated assault in the attack." In that case, murder charges turned into aggravated assault. Somewhat bizarre. It really doesn't look like safety in the primary concern at Fraser Pretrial.

If jails are operating at 140% capacity suffice it to say they are under funded.