Pat Fogarty: Which side is he on? 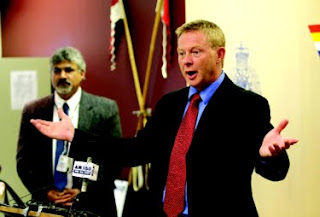 For someone who is in charge of the BC Gang Task force, this guy is making some pretty outrageous statements. He told the Kelowna Daily courier that "There is no Wolf Pack. I don't know where people get that type of information. Probably the real truth is they were holidaying up there."

We know where that information came from. Kim Bolan doesn't report something unless she is confident in the reliability of the source. The denial is puzzling. That's not the only outrageous statement Pat Fogarty has made.

Patman claims "The Hells Angels chapter has almost dismantled now. They don‘t even have club status any more. Our biggest fear here in our province is actually the ones that aren‘t named."

"We‘ve pounded them here (Lower Mainland). Most of the RCMP resources initially were here and that was coupled with more competition, less market share. It‘s almost like the big wigs survive in Vancouver area and push out other ones or factions of bigger groups start up field offices elsewhere because they can make additional money."

The Gang Task force has done absolutely nothing to curb or curtail the Hells angels drug trade in East Vancouver. Nothing. Last night I saw two Harley's parked in from of the Black Door and the Bulldog cafe which the police let the Hells Angels operate freely. The Hells angels are taking the profits they make in East Van and live the good life in Kelowna as a result.

They also expand their drug trade into smaller communities like Vernon, Kamloops, Prince George and Dawson Creek. The drug trade in these smaller towns is controlled by the Hells angels. This leader of the gang task force is lying. It reminds me of that retired police officer from Vancouver Island who kept sending in letters to the editor saying what wonderful people the Hells angels are. They just beat Dain Phillips to death with baseball bats and hammers for God's sake.

You don't solve the gang war by going after all the hells angels competition and let them control everything. Letting them torture addicts for drug debts is wrong. No wonder the VPD thought the security of the AG's office was compromised.

The Jones brother's indictment and the Robert Shannon conviction show that the Hells angels control all the grow ops and all the crack dealers in the cross border pot for cocaine drug trafficking ring. Focusing on the ones who are not named will not stop the ring because they will just find another mule. It's the Hells angels who control and profit from it.

One blog reader pointed out that J Edgar Hoover said there was no mafia. Turned out he was being blackmailed by them.