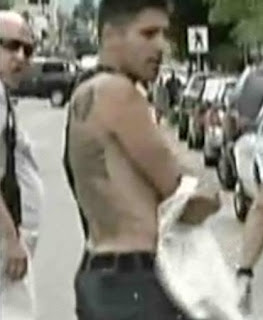 Everyone is wondering who the guy with a wounded arms seen in the Kelowna video clip leaving the scene is. Many are wondering if it's James Riach. I thought James Riach went to the hospital. This guy is walking away with a group of people on his own accord. Anyone recognize him? Obviously we'd like to get a photo of Riach to compare if anyone has one.

The Vancouver Province is reporting that James Riach fled the scene. Maybe this screen clip is him after all. News 1130 also reported that James Riach is still on the loose despite the fact that one source claims they heard on a police scanner that the police had one suspect in custody. It's not clear if that meant protective custody or under arrest. However, since it's a group of people it is also possible they were just witnesses who were hit with broken glass in the crossfire.

Another source claims Riach was taken to hospital and later released which would men this is not him.