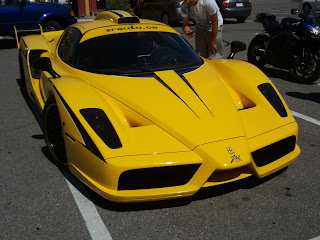 Looks like Larry Amero and Jonathon Bacon weren't the only people of interest in Kelowna last weekend. Someone spotted this expensive Ferrari from Alberta pull into DeDutch on Saturday morning. They claim the guy that got out was small, covered in gold chains and looked like a pimp. Turns out it was a gang meeting alright.

A gang of car enthusiasts in town for Ryan Fipke's wedding at Sparkling hill resort at predator ridge golf course. Ryan is the son of Chuck Fipke the diamond mine owner. I always wondered why a Canadian diamond mine would also own diamond mines in Africa. What's to stop them from taking a conflict diamond in Africa and claim they found it in the Canadian frozen arctic? Then again, everyone says I read too many conspiracy theories. If they really have found diamonds in the Canadian arctic, then more power to them.

Obviously, if someone owns a diamond mine then that is a legitimate source of income. What we are concerned about is people who own several very expensive cars, boats and homes with no job and no tangible source of income. That is a concern when we see public gang violence tied to the illicit drug trade. 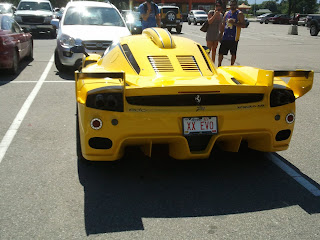 Someone sent in another photo of him with the car. They claim his name is Austin Powers. He's not a gang member. He's an exotic car dealer. The web site is on the car right in the first picture. People say he looks greasy. If he wants elegance and style perhaps someone should give him a bar of soap. 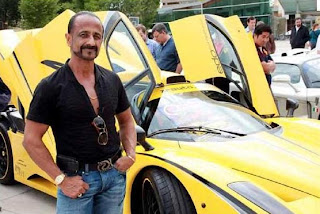