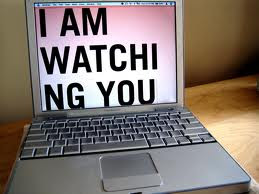 Here it is. Canada's own Unpatriotic Act where the government creates a law that gives them the right to warrantless surveillance of the Internet. No big surprise but very concerning to say the least. If Michael Giest is concerned, so am I.

Remember Harper has a history of lying and firing whistle blowers. They kicked out a student from one of his speaking engagements because she posted a picture of herself on facebook with one of the other candidates. Not only is that bizarre, it's creepy. How did they know she posted a picture of herself with one of the other candidates on facebook? Who cares if she did. These intrusive laws sounds like the Iron Curtain. Macleans refers to it as Harper's promise: a warrantless online surveillance state.

Let's pause for a minute and ask ourselves who it is that we are empowering to spy on us. The Scotland Yard just got caught lying about a murder they committed. They claimed a suspect they were following fired upon them so they shot him dead. Yet the ballistic report proved they lied. So if they lied about that, what else would they lie about?

Remember the Murdoch wiretapping scandal? The week after the whistlebower leaked out the fact that police were involved with the illegal wiretapping he was found dead.

Posted by Dennis Watson at 1:27 PM