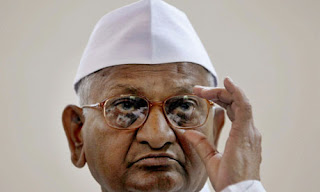 Thousands of people took to the streets Wednesday in India to support activist Anna Hazare, who plans to stage a public hunger strike as part of a mass anti-corruption protest. Hazare says the current anti-corruption bill being considered by parliament isn't strong enough because it exempts senior judges and the prime minister from investigations.

Meanwhile back in merry old England, Clive Goodman warned executives after he was jailed in 2007 that hacking had been "fully supported" by the tabloid's editors, including Andy Coulson, who later became an adviser to David Cameron. Imagine that. Shortly after it was leaked out that the British police were involved in the phone hacking scandal, the whistle blower that leaked that information was found dead. Now we see another connection to David Cameron's government. Lets see if this whistle blower ends up dead too.