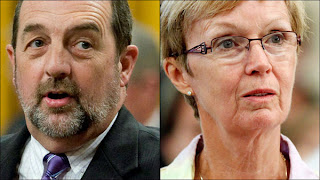 On the lighter side we once again see a humorous revelation. Turns out that a high ranking member of Harper's caucus used to be, brace yourself, a member of the Bloc Québécois. Gasp. What a scandal. Not. Who really cares?

The Harper media madness has been railing about the fact that the interim NDP leader used to be a member of the Bloc. Who cares? It's obvious that many voters in Quebec switched from the Bloc to the NDP in the last federal election. The federalists should be thrilled and welcome them with open arms. Unless of course Mr. Harper really isn't a federalist. With all the railing accusations perhaps it's Mr. Harper who is the real separatist. After all he does hate the French and he does hate immigration.

The perpetual hysterical hypocrisy is concerning. It's just like when Harper was the drama queen about the evil coalition when in reality a letter was produced showing his intent to form a coalition when the tables were turned. Hypocrisy and censorship are a bad combination.