The Hells Angels and Forrest Schab 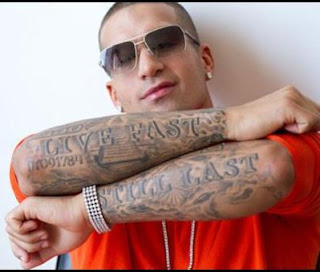 Hey, remember that Canadian Rapper that went missing named Forrest Schab? Well someone just sent me a link to a court file where John Punko and Randy Potts were charged with trafficking cocaine is Surrey of all places. It names Surrey meth cook Kerry Ryan Renaud as well as Forrest Schab.

So if Forrest Schab was involved with the Hells Angels one has to wonder about the post on the Dirty claiming that Forrest owed Larry Amero and Rob Velek money. Rob Velek is connected to Revolution in Langley where Larry and Weird Hal Portoeus were posing in support.

But that's not all. The court file also names Jason Brown. He's the Hells Angels associate that was found with a 9 mm, cocaine, a kilo of meth and Red Scorpion gear back in 2009. Well the new Red Lobster logo at least.

So he was tied to John Punko, Randy Potts and Kerry Ryan charged with producing and trafficking meth as well as trafficking cocaine in Surrey, Vancouver and New West. So if the Hells Angels were selling cocaine and crystal meth in Surrey at the time, who was Eric Sandberg referring to when he said "they" were ready to eliminate at the competition in Surrey? He was telling it to a Hells Angel associate from the Zig Zag crew.

This is another clear connection between the new Red Scorpions and the Hells Angels. The other previous hint we had that the Hells Angels were connected to the Bacon Bothers RS takeover was the fact that Larry Amero and Weird Hal Porteous were posing in support of Revolution. Murdered Bacon brother associate Kevin LeClair used to fight out of Revolution.

What's my point? The Hells Angels don't just kill rivals. They kill people who owe them money as well as people they rip off in bad business transactions as well as anyone they mistakenly perceive to be a rat. Let's see.. Geoff got ripped off and Britney was falsely accused of being a rat. Do the math and call it in. Crime Stoppers. Rats rip people off.