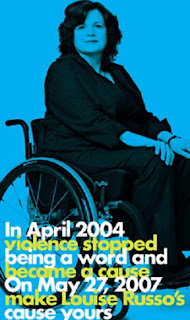 The Calgary Sun has reported that friends of the victim claim one of the two girls with Jonathon Bacon and Larry Amero in the brazen daytime shooting has been left a paraplegic. The names have been released but we're still not sure which Hells angel one was the niece of and which Hells Angel the other was the girlfriend of.

The Vancouver Province is reporting A 21-year-old Maple Ridge woman, who is related to several Haney Hells Angels members, was paralyzed in the brazen hit that killed notorious gangster Jonathan Bacon.

It is tragic the girl is paralyzed. Just like it was tragic when Louise Russo was caught in the cross fire at a Toronto sandwich shop when Toronto Hells Angel Paris Christoforou teamed up with mobster Peter Scarcella in a drug related gang hit.

One person commenting on the article pointed out that the police did issue a public warning not to associate with the Bacon brothers because there was a gang hit on them. It is a tragedy these two girls were wounded, one seriously. Yet they were wanted not to associate with them and did so anyways. They also knew where the money from that boat and everything else was coming from. The mother they shot in Toronto was a completely innocent bystander.

Again, I think it is terrible these two girls were shot one chronically. Yet that is something the Hells angels do. The Hells angels are quick to kill a spouse along with a target just because. The Hells angels are the first ones to threaten someones family. I'm certainly not saying they deserved it. I'm saying that is what they do but we need to take the higher road. The solution is simple. It involves implementing the New York model not the Amsterdam model.