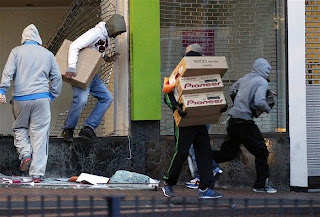 One blog reader pointed out how civilized Japan was after the earthquake and reactor leak and how uncivilized the rest of us are in the West as shown in the Vancouver hockey riot, in New Orleans after the hurricane and in London now. Obviously there are more good people out there than bad and that criminals get empowered by a mob. Yet it is clear that Japan has shown to be much more civilized than the rest of us in the West.

The Vancouver hockey riot was the epitome of spoilt brat stupidity. There was no reason. A bunch of brats just wanted to trash things. The rest of Vancouver was outraged. They came out to help clean up and were vigilant in reporting facebook friends who bragged about rioting. Yet the front page of today's Vancouver province pointed out the cold hard truth. London has already charged 100 rioters. Vancouver has yet to charge any. That is an embarrassment.

My point is lawlessness is self defeating and very short sighted. Kids in a mob can temporarily feel empowered when they are allowed to use violence to vandalize, loot or start fights but the laws they break are the same laws that were protecting them. If they can loot a store, then anyone can take from them what they took from the store. If they can burn someones car or home, then someone else can burn their car or home. If there is no law or police, anyone can assault them for no reason. Lawlessness doesn't just leave everyone blind, it leaves everyone impoverished.

Looting after an earthquake or hurricane is equally absurd. Where are ya gonna plug in that big screen TV buddy? Your house has just been destroyed. I had previously mentioned during the Vancouver riot having spoken with a man who lived in Chicago during the Chicago riots. He said they lived in the suburbs and all had guns. He said they all got together, pulled out their guns and said if you bring that riot to our neighbourhood, we will shoot you dead. Right or wrong it prevented the riot from spreading.

Likewise, Londoners are ready to fight back. Here in Surrey some kids were vandalizing cars. A gang member came out and saw the kids vandalizing his car. He pulled out his gun and shot him dead. Right or wrong it sent a clear message. No doubt if a Vancouver riot was to spread to Surrey, we would fight back to protect our homes and our property as well as the Businesses who contribute to our community.

Trashing all the small businesses isn't sticking it to the man. It's killing your community by destroying small business there and making it so that only the huge corporations that make massive profits and pay crappy wages will be able to survive. It is shooting yourself and your own community in the foot.

Having said that, it is important not to be distracted by the looting and the lawlessness, so we don't forget the stunning injustice which sparked the riot.