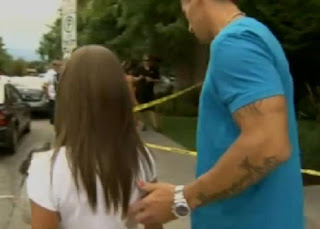 CTV reported that witnesses on the scene claimed the woman with brown hair in the white T-shirt was in the vehicle that was peppered with gunfire Saturday in Kelowna. CTV also reported that online comments identified her as Lyndsey Black, Hadden-Watts's roommate. Yet other reports claim Lyndsey Black was shot in the foot and taken to the hospital.

The guy in the picture obviously knows the girl witnesses claim was in the vehicle with Jonathon Bacon when he was shot dead. Note the guy's tattoo, gold chain, gangster swatch and painted nails. That's kind of strange. I missed the painted nails but someone sent me a link to the video and said to watch for it at 113 into the video clip.

He is also seen walking away from the scene in the other video clip with the same girl as well as the other guy people are thinking is James Riach. That hasn't been confirmed. Whoever he is, it looks like he has the same signature man purse. I couldn't see his nails. However, since it's a group of people it is also possible they were just witnesses who were hit with broken glass in the crossfire. 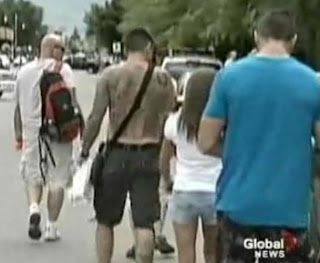 The guy in the blue shirt might have known the people in the car that was shot. This news clip shows him trying to get to the car walking past police tape then walking away with the guy people think is JR.

I can't keep up with all the comments on Kim's blog or on the Castanet thread but I really don't think James Riach was involved with the shooting if he was in the car like they claim. Being in the same car they were peppering with gunfire wouldn't make him a suspect. He would have information but like most gang members who get shot, likely wouldn't be cooperating with police.

Nor do I think this was a Hells angels hit on Larry. The girls have Hells angels affiliation. The Hells angels do murder their own but I really don't think they did this. If they wanted to kill Larry they could do that anytime.