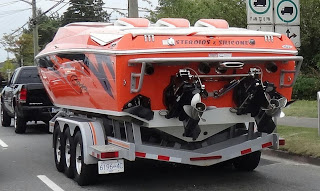 Speaking of Robert Shannon's boat, here's an interesting photo. An anonymous source claims they saw this boat was pulling out from the public dock in the Okanagan lake in Kelowna less than a block from the Grand hotel where the shooting took place the following day. This happened around 3:00 PM on the Saturday.

The witness claims when they saw the boat they jokingly said that must belong to a drug dealer. Then to their surprise they recognized the driver and passenger from photos on this web site. They claim the driver looked like Jonathon Bacon and the passenger looked like Larry Amero. They stopped at the dock and picked up another tattooed guy and two girls.

I certainly don't condone the evil these guys do to make their money. Obviously if these guys are riding around in a boat like this it was bought with drug money. I wonder how many addicts fingers were cut off or how many addicts were tortured in crack house basements to pay for that boat? It represents the epitome of greed.

The boat does have a strange name: Steroids & Silicone. Silicone as in implants? What a plastic world. The witness did say it looked like Jonathon was on steroids. We know Larry has. Another source claims they knew Larry in high school. They claims Larry went to Walnut Grove in Langley. They said he was skinny and got picked on. So there ya have it. Take steroids, join a gang and sell crack. That way you can get payback for being picked on all those years and become a bully. The problem is, steroids don't make you bullet proof and any 12 year old kid can pull a trigger. Steroids & Silicone certainly isn't something I'd put on my tombstone.