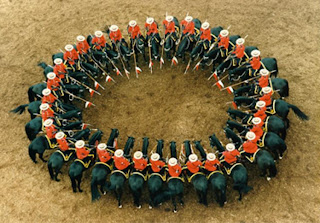 Locally, John Ferry wrote an article in the Vancouver Province calling for a Metro police force that he hopes will solve all the world's problems. Obviously, that's going to generate a knee jerk reaction from the RCMP. Personally I don't see a metro police force in BC being the solution to anything. Point granted it works in Ontario. But this isn't Ontario. Ontario has a much larger population base.

Although there is merit in the concern that our current system is fragmented, let's think about how it got that way. Vancouver wanted it's own police force. So they made one. The same with Delta and New Westminster. They wanted more control over their own policing so that is what they decided to do. I don't think those cities want to give up their control over their own police forces.

Then comes the issue of unionization. Some people love unions, some people hate them. The feeling that I get from the RCMP is that they prefer not to be unionized. That is their choice. Just like it's Vancouver's right to chose unionization.

Personally, I'm an idealist. I support the historical tradition and the values portrayed within the RCMP. I'll be the first one to agree the RCMP needs help. Everyone likes to cite the taser incident at the airport over and over and claim that is proof why we need a regional police force. But it's not. VPD has had it's share of police brutality complaints. The use of force instructer in New Westminster got drunk and robbed a newspaper deliveryman with two of his buddies.

What we do need in BC is a civilian agency that monitors police complaints. That is a given. It needs to oversee all policing in the province not just one force. The taser incident in the airport is over rated. Yes it was an absolute tragedy. Yes the police misused the taser. Remember it's the airport. With all this terrorist frenzy it isn't surprising the police over reacted in a call to make the peace in the airport.

Saying that a regional police force would have prevented the Vancouver riot is somewhat absurd. Yes the police were under prepared. We just came off the Olympic high. We didn't really think the mob would flip to the other extreme so fast over something so senseless. That certainly doesn't mean we want to march around with the SS breaking into homes and removing civil liberties. Jim Chu is a good man. I still think he would be perfect at the head of the RCMP if he so chose. Yet perhaps a better choice would be to promote someone from within. Having a civilian lead the RCMP is kind of like having a civilian be a general in the army.

I like the idea of speaking with an RCMP officer in Surrey from Quebec. I like the idea of an RCMP officer from Surrey serving in Quebec as well. One of the problems with a City police force is stagnation. I think working main and Hastings for your entire career could get you down after a while. I think having the option to transfer out would be good and I think giving other officers the chance to work Main and Hastings would be a eye opener for them as well.

Perhaps the best way to over come the fragmented system is to have the various agencies work together. Imagine that. As long as there is the threat of doing away with the RCMP or having VPD give up it's control of it's policing, all the agencies get territorial and protective. Let's keep the status quo and encourage more interaction between the forces.

Ontario's Biker Enforcement Unit came out to Langley when the Whiterock Hells Angels had a party there. Why can't RCMP officers go on an exchange with VPD officers and visa versa. By building those kinds of relationships you break down the walls of ignorance and stereotypes and you promote interaction. It's like I've got a friend in the VPD I trust so I can share information with him or visa versa.

I think we should preserve the RCMP. I do think Stephen Harper spending millions on promoting the RCMP "brand" while at the same time cutting funding for the RCMP and the Gang Task Force is hypocritical and bizarre. Yet preserving good traditions helps us carve out and retain our unique identity as a nation.

It's like Paul Gross in the TV Series Due South. Ya gotta love that optimistic Dudley Do Right naivety the character portrayed. Seeing the RCMP on police boats in Pitt Lake was inspiring. It's like the adage of how the Mountie always gets his man. It reminded me of seeing a police presence in Surrey Central complete with volunteers, a mobile command center and auxiliary police officers on quads for chasing down suspects in Surrey parks. That was awesome. Let's preserve our heritage and not trade it in for mall cops. This is our home. That makes it worth fighting for.