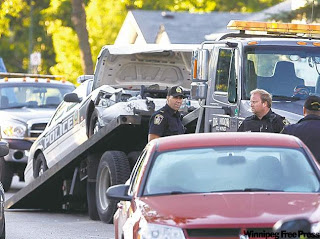 Police in Winnipeg heard about a hit on a Hells Angel and set up surveillance on his house. When the Rock Machine tried to shoot him, the police rammed their vehicle and intervened. Stopping violence is a good thing but offering the Hells Angels private security and protection to sell crack is not.

Maybe we should be offering protection to the judges and crown prosecutors that prosecute the Hells Angels. You know, the ones the Hells Angels threaten. Hells Angel Ian Grant was found with a confidential RCMP file in his home. The police have a leak. Ken Houston is a retired Winnipeg police officer who was caught in the same SUV as a Winnipeg Hells Angel charged with manslaughter named William Bowden. Both men faced numerous weapons charges as well as possession of a controlled substance.