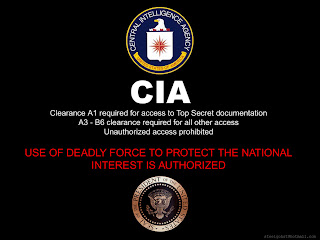 Agency is the freedom to choose. It’s also another name for the CIA. Often the CIA is referred to as the Company or the Agency. It does exist. It’s a secret society whose mandate is murder to get gain. The absence of public accountability is a great concern. When the police or the government make a mistake, that mistake is hidden with denial as the whistle blower is slandered, yet all in all when the truth finally comes out, the police and the government are publicly accountable. Intelligence agencies are not.

It is shocking to hear the news that CO19 lied about Mark Duggan firing at them before they shot him dead. They simply lied about it and broke the law. Another recent headline in England was the Murdoch scandal. An overzealous tabloid was wiretapping telephones to get the inside scoop. They even hacked into a missing teenager's phone system as well as the family of a murdered schoolgirl trying to get inside information. They even wire tapped members of the Royal Family’s phone.

My first impression was how on earth is a newspaper going to have the technology and ability to tap the Royal Family’s phone without the help of MI 6. It just doesn’t make sense. Then we read that not only were government politicians involved in the scandal but so were members of the police. That’s starting to make more sense. Only the week after the whistle blower leaked out the fact that the police were involved in the scandal, the whistle blower and the only witness was found dead. That is profoundly significant.

Was killing him protecting a state secret? Was the use of deadly force authorized to protect that state secret? We’ll never know because the Agency has absolutely no public accountability. It does look highly suspicious as does the death of Dr. Kelly.

MI6 was caught red handed giving false information to the media about Iraq’s weapons of mass destruction. The whistle blower that leaked that information out to the public was a British weapons inspector in Iraq named David Kelly. He died of a suspicious suicide. Then the spin doctors had the audacity to blame Iraq. They claimed that Iraq’s secret service must have killed him because they were upset with him being a weapons inspector and exposing the fact that Iraq had WMD.

Except Iraq didn’t have any WMD and Dr. Kelly knew that. Dr. Kelly leaked that fact out to the media. That fact is something Iraq would have wanted the world to know. The only way Iraq’s secret service would have wanted him dead is if they were the ones still on MI6 and the CIA’s payroll from back when they put Saddam Hussein in power and were selling him chemical weapons to use on Iran.

So in England we have two suspicious suicides that are profoundly significant. Sean Hoare and Dr. Kelly. Likewise in the United States we have two other suspicious suicides that are profoundly significant: Gary Webb and Danny Casolaro. Gary Webb published documentation linking the CIA to arms and drug smuggling in Nicaragua which fueled the LA crack epidemic in the /80’s.

Catherine Austin Fitts used to be part of the Bush Administration. She worked for the US government. She knew how the attack poodles operated in their disinformation campaigns set out to discredit whistle blowers. That is why she found the Gary Webb story so plausible.

Unfortunately there is no happy ending to this story. There’s nothing we can do right now to fix the problem. Other than opening our eyes and refuse to drink the kool aid. That is the first step. The next step is to stop passing unpatriotic legislation that empowers these dark agencies to spy on ordinary citizens without a search warrant.