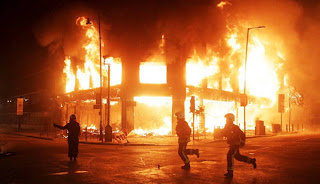 Update: Third day of riots spread to Liverpool and Birmingham. This is not good. This does not build bridges. It just tears them down.

I'm saddened to hear of riots in London again. North London, Tottenham. Reminiscent of the riots in /85. I stayed in Brixton, South London a few years after the riots. The front line was a long line of businesses that had been boarded up and abandoned. After the riots the businesses never returned. It left the community decimated. Mind you the Brixton Market was awesome.

So what was the cause? Well it wasn't because someone lost a hockey game. It was because a local resident was shot by police. Mark Duggan, 29, was shot dead by police Thursday while he was being placed under arrest.

A small crowd, mostly consisting of friends and family, had gathered Saturday outside the Tottenham Police Station to protest the killing of Mark Duggan. Others came, violence started and the demonstration turned into a riot.

There are conflicting reports about the conditions of the shooting. Some reports claim Mark Duggan was in a taxi and started shooting at police. When police returned fire Duggan was killed. If that be the case it's hard to understand how that could cause a riot. Unless of course that wasn't the case.

Mark was from the "notorious" Broadwater Farm Estate in Tottenham. When I stayed in Brixton, I met a guy selling hash on the front line. He gave me a tour of the area and described what happened there during the riots. He mentioned Tottenham and Broadwater Farm Estate. He said don't go there. They'll drop a fridge on your head. So of course I went.

No one dropped a fridge on my head. I heard some Regee music playing in the background. Not blaring offensively. It was just cool and clam. It was nice. It kind of reminded me how everyone used to talk about Divis flats on the Falls Road in West Belfast. I met a lot of really nice people there.

No doubt we'll wait for the ballistic report to come in. Yet the official story does sound suspicious. The police admit it was a covert operation and that they were following the suspect in a taxi. The police claim the suspect fired at them and hit an officer in his radio on his chest. Right after that "marksmen" opened fire and shot him dead. What I personally find suspicious is terms like covert operation and marksmen.

Covert operation is a term used by intelligence agencies not under cover police. A covert operation with marksmen on scene would reinforce that. Sure an under cover drug investigation could technically be referred to as covert and such an operation would have SWAT or whatever the British equivalent would be, yet I find those terms suspicious. Why would the family hold a peaceful protest if Mark was a know drug dealer who shot at the police?

There are many unanswered questions and I'm not sure an inquiry will be able to answer them. One thing for certain is that this is a horrible thing to have happen right before the Olympics. No one wants riots during the Olympics and no one wants London to turn into a police state either. Let's rebuild a better future. 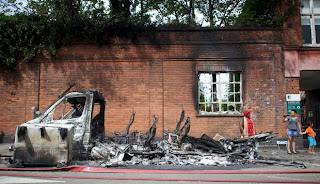