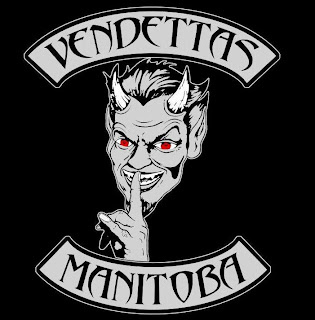 Things have quietened down in Winnipeg. It's amazing what a few arrests will do. It's almost like it's only a handful of people perpetrating all the violence. Winnipeg recently saw a spike in gang violence after the Rock Machine and it's Shadow group the Vendettas MC started to fight back against the Hells angels and their support club the Redlined Support Crew.

Of course we find out that the violence started because the Hells angels killed one of their own to let the Village Idiots from Ontario take over the drug trade in Thompson, Manitoba. That betrayal understandably created some animosity. Now we hear one of the dingledorfs from the GTS in PG went to Winnipeg and crossed over. That's just a rumor floating around the net.

The GTS in Prince George are facing two charges of gang rape at the Renegades clubhouse. Renegades of course are a Hells angels puppet club in PG. Stevie Wonder wasn't on the list of members charged in the gang rape so he either skipped town or he wasn't involved so they can't say they kicked him out for committing rape. They're paying the other accused lawyers.

I had commented on how I thought the Rock Machine had a better logo than the Hells angels. An eagle head is way better than a helmeted skull with devil horns. So why does a Rock Machine support group go and put devil horns on their logo? Doesn't that look really juvenile? Then there's the secrets.

The biker war isn't a biker war it's a drug war. It has nothing to do with defending the honour of a fallen brother. It's just about fighting over the right to sell crack and that is really messed up. Legalizing everything won't stop the violence it will only make it impossible for the police to control because they won't be able to arrest anyone for selling crack. They'd just be able to give them a ticket if they were doing it without a license.

Legalizing crack is socially irresponsible. Handing out free crack pipes is socially irresponsible. Clayton Rouche, the founder of the UN showed loved for his brother by helping him over come his crack addiction. Getting off crack was a horrible experience but in hindsight James Coulter said: "Clay had a very big heart. I will never forget how he helped me get out of addiction. I will never forget - he put a lot of money and a lot of time into getting me clean; I didn’t really notice it at the time - how much love he was putting into me. But I do now.”