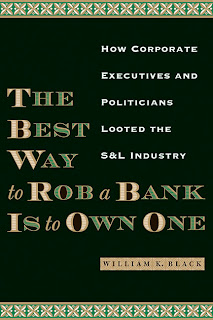 William Black was a regulator during the Savings and Loan scandal in the /80's. He wrote an interesting book called "The best way to rob a bank is to own one." He claims that the current financial crisis and economic meltdown is driven by fraud. Micheal Moore interviewed him in his movie Capitalism a love story where he stressed the difference between Capitalism and Democracy. Greed is not good. With regards to bank deregulation it has been said, When you destroy financial regulation you create a financial catastrophe.

Posted by Dennis Watson at 1:31 AM