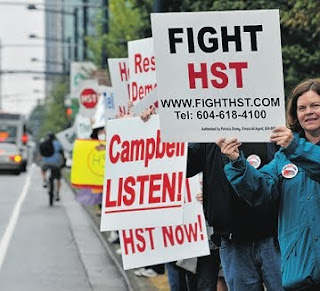 Voters in British Columbia have voted to dump the Harmonized Sales Tax after the results of a provincial referendum were released today. The tax has been ousted with 54.73 per cent of voters turning it down.

B.C. will now return to paying a 5 per cent Goods and Services Tax and a 7 per cent provincial sales tax. That means all the previous items that were except from GST will hopefully return to that same exemption. The big lie was a 10% tax on things that were previously tax exempt was a tax increase.

Jim Sinclair, president of the B.C. Federation of Labour, said the HST represented an unfair tax shift of $2 billion from corporations to families. In February 2010, British Columbia's Chief Electoral Office approved a petition submitted by William Vander Zalm, a former B.C. premier, to rescind the HST and restore the PST.

More than 500,000 people signed the petition against the tax, triggering B.C.'s unique direct democracy laws that forced the vote. Elections BC, the agency monitoring the vote, told The Canadian Press on Friday that about 1.6 million British Columbians, or about 52 per cent of registered voters, had their say in the referendum.

Can we now vote on Gordon Campbell's appointment to the British High Commission? Alberta has no provincial sales tax. That practice increases business revenue and promotes small business. When the neo cons return to tax and spend pork barrel politics it's time to return to the traditional values the neo cons have apostatized from.