Mayor and Police Chief trafficking arms for the Mexican Cartel 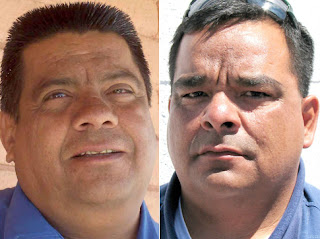 Speaking of arms smuggling, let's see how this all relates to the drug cartels and the gang war. Eddie Espinoza, the former Mayor of Columbus plead guilty to arms trafficking for the Mexican cartel. He was arrested along with the Columbus Police Chief Angelo Vega and Village Trustee Blas Gutierrez who also plead guilty.

What I find interesting is their boldness to continue their "Operation" even when they thought the feds were on to them. Chief Vega called the feds after counsellor Blas Gutierrez was pulled over and had several guns confiscated and asked the feds for the guns back. Then a day or two later they bought more guns and had those confiscated as well.

We realize the FBI operates semi independently from the CIA just as the DEA does. Why would the police chief call the FBI and ask for the guns back if he didn't think he had the backing of the CIA?