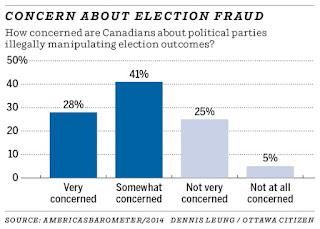 CTV is reporting that " Newfoundland and Labrador's New Democrats are challenging the constitutionality of the province's recent election, claiming irregularities were so numerous and severe that a new election must be held. Party lawyers filed the challenge in Newfoundland and Labrador Supreme Court on Monday." Can we talk about voter fraud now???

Back in 2014 the Ottawa Citizen reported that "Many Canadians are heading to the polls in 2015 worried about the potential for the 'illegal manipulation' of their votes, and showing as little trust in elections as people in some Latin American countries." Voter fraud affects everyone.