Why John Horgan is the worst BC Premier ever

Why is John Horgan the worst BC Premier ever? Wait 'till I tell ye. Let's start with the Fast Ferries. 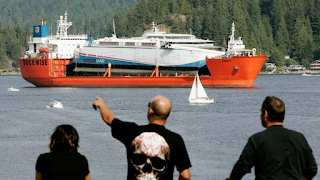 In the late /90's the NDP government of BC purchased 3 fast ferries for people traveling from Vancouver to Victoria on Vancouver Island. The reason the project is remembered as such a colossal failure is because of cost overruns and the ferries didn't work properly. We kept hearing about this scandal for years. It was a good idea. It's just unfortunate it didn't work out.

So how much did it cost taxpayers? In 1994 we were told that it was projected to cost $210 million and it went substantially over budget. When the fast ferries were sold, the provincial budget declared a $52 million loss. I think that was a little more of Christy Clark's fudgeit budget. The loss was likely much higher. Yet that is a drop in the bucket compared to what John Horgan's lockdowns have cost us. The first lockdown we were caught off guard. Now we know better. Fool me once, shame on you. Fool me twice, shame on me.

This second circuit breaker lockdown isn't just stupid, it is treason because it has a dirty political motive. Saving lives has nothing to do with it because lockdowns kill far more people than they save. During the first lockdown, the City of Vancouver, which is run by a former NDP MP, said we have to reopen or the city will go bankrupt. We'll have no money to pay salaries or contracts.

The economic devastation a lockdown creates is astounding. Stealing a person's right to earn a living is the most sinister conspiracy we have ever witnessed here. Stealing your money is one thing but in so doing you wipe out tax revenue. If people aren't working, they aren't paying taxes. If people don't pay taxes social programs collapse as the City of Vancouver soon found out.

Gordon Campbell is remembered as a charlatan and a scoundrel. His defiant arrogance in railroading the HST was the heart of his downfall. Bill Vander Zalm led the crusade to oppose the HST. The media kept telling us that the HST would save us money yet we knew that when you tax things that were previously tax except, that is a tax increase not a tax reduction. The media tried to sell it as a tax reduction. They lied. Again. What John Horgan is doing is far worse.

It's not just a matter of destroying our economy and putting our grandchildren into debt. The moral cost of this fraud is unprecedented. The Charter of Rights was framed for a purpose. It protects civil liberty by law. A lawless society that fails to uphold civil liberty is on the fast track to becoming a totalitarian government which is what the Charter was framed to prevent.

It isn't even just about stealing our money and our civil liberty. Lockdowns kill people. Suicide, addiction, domestic abuse all of these problems rise exponentially during a lockdown. If people can't go to work and pay their bills, the stress levels are off the charts. Those are the indirect fatalities from lockdowns. Canceled surgeries as well as cancer testing and treatments are direct causes of fatalities. This is one of the ways Chairman Mao murdered millions.

Brian Mulroney and Stephen Harper, the NEO Con twins raised taxes by railroading the GST and the HST. What John Horgan is doing is far worse. Not just because it cost tax payers far more money and actually killed many more people than a flu virus ever has, but because it plays into the global reset and the UN's New Worls Order where the rich get richer and the rest of us become slaves. The rich like George Sorrows and Bill Gates do not fund Communism to share their wealth. The politicians in the Communist Party of China are the richest in the world.

The rich fund Communism so they can become richer by turning the public into slaves. Communism is slavery driven by lies. It's like that World Economic Forum Video Ezra uncovered. "You'll own nothing and you'll be happy." Why? Because we said so. You won't even have to wait for an organ transplant. We'll just print one up on our 3D printer. They're not getting human organs from a 3D printer. They are getting them from executed political prisoners like the Falun Gong. This is their Brave New World where the rich get richer and have anything they want because they own an army of slaves. That is the empire of lies that now owns our media.