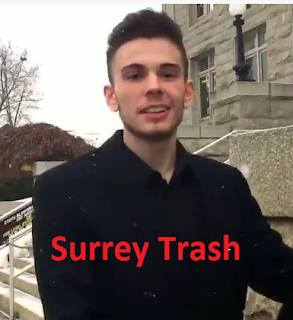 CBC is reporting that "A Vancouver man is facing nearly two years in jail after he was sentenced in connection with a gang-related shooting in Surrey, B.C., that injured an innocent bystander. The shooting happened in a residential area of the Newton neighbourhood around 3:30 p.m. PT on July 9, 2017. Two people in separate trucks shot at each other in the 7700 block of 147A Street, police said at the time. A bullet grazed the shoulder of a 62-year-old woman from Ontario who was visiting family in Surrey." How the f*ck do you pronounce his name?

"After a year-and-a-half-long investigation, Abd'l Malik Loubissi-Morris was arrested in Richmond, B.C., on Dec. 11, 2019. He was charged with attempted murder, use of a firearm in the commission of an offence, aggravated assault and discharging a firearm with intent."

"The Crown said Loubissi-Morris pleaded guilty on March 31 in New Westminster, B.C., to aggravated assault and a single firearms offence. The attempted murder charge was stayed as part of the plea agreement. Loubissi-Morris was sentenced to 46 months in jail for the assault and 20 months for the firearms charge, to be served concurrently." Less one third statutory release.

OK this is a punk a*s Surrey Jack who committed a targeted gang related shooting with ileal guns that injured a 62 year old innocent bystander and gets 46 months in jail. This was a planned event. They torched the truck after the shooting. It was not his first offense. These kind of jail sentences bring us back to Vern's declaration that "Judges are the Problem." One of two. The judge simply approved the Crown's plea agreement. The Crown prosecutors made the deal just like they dropped the charges against the kids from Edmonton that shot Ali.

Look at how sad and ashamed your mother is. She had wanted so much more for you. You're not Malik, you are Haram. You need to grow up an honour your mother. That's what being a man is.

Update: "Loubissi-Morris was sentenced to 46 months in jail for the assault and 20 months for the firearms charge, to be served concurrently." OK so he got 46 months in total since the 20 month charge was to be served concurrently. I thought the assault was for when he intentionally drove his car into some pedestrians in Vernon but it wasn't. He got off that one and was just sentenced with dangerous driving. Infotel reported that he was involved with various gang related crimes in Vernon so I'm all ears if anyone knows what his affiliations are. Cheers.

Posted by Dennis Watson at 4:36 AM