Mafioso busted after being seen in YouTube cooking video 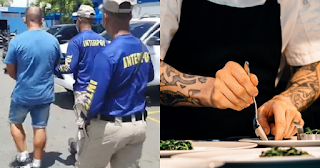 The New York Post is reporting that "A Mafia fugitive has been caught in his Caribbean hideaway - after being spotted in YouTube cooking videos he made with his wife, Italian police said Monday. Marc Feren Claude Biart, 53, had been on the run since 2014, when Italian prosecutors ordered his arrest for alleged cocaine trafficking for the Cacciola clan of the ‘Ndrangheta Mafia."

"He managed to lead a quiet life in Boca Chica in the Dominican Republic - until he showed off his Italian cooking skills on a YouTube channel, police said, according to the news agency. While Biart attempted to hide his face, he was betrayed by distinctive tattoos on his body." Bad luck.