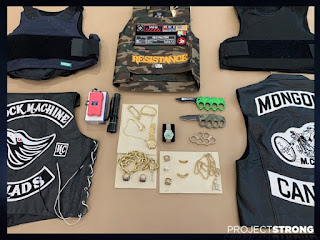 "Hamilton Police are releasing the results of Project STRONG, a four-month investigation into drug and gun activity in Hamilton. Launched in December 2020, Project STRONG was created in response to an increase in shootings and violent crime. Last year, there were 51 shootings in Hamilton, including 21 shootings that took place between September-December."

They didn't go after legal gun owners who have no criminal records. They went after those involved with the illegal gun violence. Gang shootings use throw always not legally obtained guns because those are traceable. Throwaways aren't.

In addition to illegal guns, Hamilton police seized 4.5 kilos of cocaine, 2.5 kilos of fentanyl and 1.5 kilos of crystal meth. This is what the BC Gang Task force doesn't do. Instead of stopping crime, they want to profit from it. So does the BC NDP.