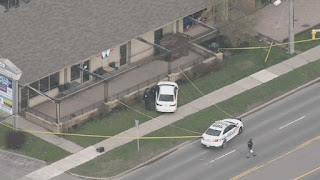 CP24 is reporting that "Police say that two people are in critical condition following a daylight shooting in Ajax. It happened near Kingston Road and Harwood Avenue sometime after 4 p.m. Police say that the two victims were transported to a trauma centre in Toronto with life-threatening injuries." Ajax is just outside of Toronto on the way to Oshawa.

"The circumstances surrounding the shooting remain unclear, though footage from CP24 shows a vehicle on a sidewalk that appears to have crashed into the side of a patio belonging to a Wild Wing restuarant. Multiple bullet holes are visible in the vehicle's rear windshield and along its side. Its front passenger side window also appears to have shattered."