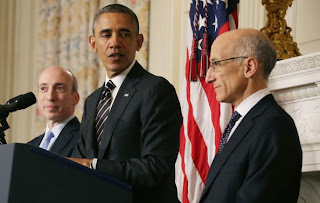 OK I'm a little confused. The Vancouver Province is reporting that Obama claims a Crimea referendum is illegal and Harper says Canada will not recognize its forthcoming referendum on whether to join Russia. We know Harper is an idiot but I'm curious as to where Obama's arrogance is coming from? Since when is an election contrary to democracy? It's as though he's being advised by Goldman Sachs or something.

So let's have a recap. The Ukraine used to be part of the Soviet Union. Now they are free and independent. The EU want the Ukraine to join the EU and Russia wants them to join back with Russia. Russia gave the Ukraine a financial bribe to join with them and people started protesting. The Russian military then invaded to protect Russians living in Crimea. OK so that is all a very bad precedent. That is an invasion of a sovereign state.

However, in that region of the Ukraine there appears to be pro Russia supporters who would rather join with Russia then join with the EU. Having a referendum would be the most democratic way to determine just how many people there want to return to Russia. Obviously Russia is not known for fair elections. Putin himself has been accused of rigging elections just like George Bush has been. Holding an election during a military occupation is clearly a farce.

Goldman Sachs should not be advising anyone

Henry Paulson was the former CEO of Goldman Sachs and became the US treasury secretary under George W. Bush. Many felt issuing the bank bail out was a conflict of interest. Likewise, Goldman Sachs became Obama's #1 Private Contributor. Under the Obama Administration, in 2009 alone, Goldman Sachs took more than $20 billion in taxpayer cash through bailouts, payments and backstops; and then turned around and paid out $16.2 B as 2009 bonuses, plus an additional $5 B more in bonuses in 2010. Donating $1.6 B to Obama's campaign represented less than 10% of the $20 B “bailout” Goldman Sachs received. Not a bad investment return.

Several former Goldman executives hold senior positions in the Obama administration, including Gary Gensler, the chairman of the Commodity Futures Trading Commission; Mark Patterson, a former Goldman lobbyist who is chief of staff to Treasury Secretary Timothy Geithner; and Robert Hormats, the undersecretary of state for economic, energy and agricultural affairs.

Goldman Sachs does not represent business. Bill Gates represents business. Goldman Sachs has been caught defrauding the public on more than one occasion. They hid Greek's debt from the EU which was created through investment fraud. Why on earth does a criminal organization like that which has defrauded billions of tax dollars hold senior positions in the US Government?

This is a huge concern. It does not mean we jump out of the frying pan and into the fire by adapting Revolutionary Communism. Communism is even worse. In fact the same bankers that are buying the government fund Communism. They are one in the same. This is something we need to address. Our civil liberty depends on it. 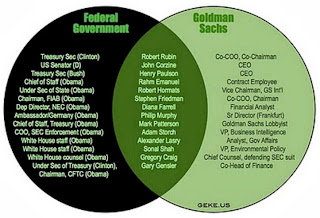