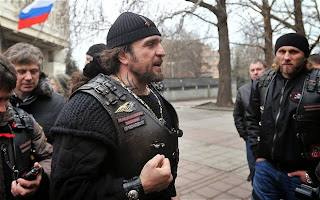 Well this is interesting. The Telegraph in England is reporting that the Night Wolves are Russia’s largest motorbike club, with over 5,000 members. They appear to be aligned with the Bandidos not the Hells Angles.

They are mobilizing in the Ukraine in support of Russian troops there. It sure is a mixed up world so it is. Just ask the Kinks. The Aging Rebel has also done a write up about them.