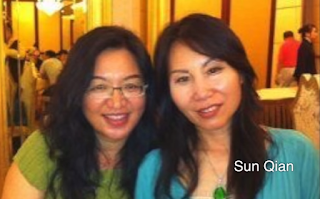 "Falun Gong practitioners and supporters will rally outside of the Chinese consulate 11:30 am- 12:30 Friday April 6, 2018 at the 3300 Block of Granville street, Vancouver to call on the Chinese government the unconditional immediate release of 52 year-old Canadian citizen and businesswoman, Ms. Qian Sun, who was illegally arrested on February 19th 2017 for her faith in the spiritual discipline Falun Gong."

"Reports detail how she has faced abuse, torture, and recent intense brain washing sessions from March 12-22nd to have her renounce her faith. According to family both lawyers representing Ms. Sun have dropped the case recently due to pressure and intimidation from China’s Justice Bureau who has now fast tracked the case to be heard on April 9th."

Anastasia Lin made a video about this case. There is nothing democratic about torturing political prisoners for their religious beliefs. The archaic atrocities of Communism is outdated.

Release Qian Sun and we can talk about it.