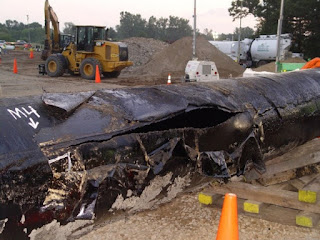 April 9th Global reported that "The Alberta Energy Regulator says the province’s Orphan Well Association (OWA) will look after an apparent leak at an oil and gas handling facility owned by Insch Commodity Ltd. It says it made the decision to call in the OWA because the Warburg, Alta.-based company had not started cleaning up a spill on the site west of Edmonton as required under an order issued last week. All licences held by the oil and gas producer were suspended after no one answered its 1-800 emergency phone line following reports of the spill at the facility."

Meanwhile back on the ranch, Justin Trudeau was in France calling on the signatories of the 2015 Paris climate accord to ensure the landmark deal became a reality. "It's up to us to make this accord in principle a reality," Trudeau said in a speech that earned several standing ovations. "Our two countries are united in their ambitions for fighting climate change, even as we pursue sustainable growth for our economies," Trudeau said on the last day of his two-day visit to France. So the fallen rock star earns the hypocrite of the year award for saying one thing and doing the other by cramming the oil pipeline through BC without negotiating a fair deal.

"In 2010 an Enbridge pipeline burst spilling over 1 million gallons of Canadian crude oil into the Kalamazoo river. It was the largest inland oil pipeline spill in US history. Even the environmental protection agency has all but admitted that up to 168 thousand gallons of the oil will remain in the Kalamazoo river indefinitely."

Study defines link between fracking and earthquakes in northern Alberta