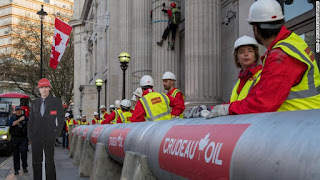 CNN is reporting that "Canadian Prime Minister Justin Trudeau was greeted in London on Wednesday with a 98-foot fake pipeline meant to challenge his support of a controversial oil pipeline in his country. The stunt, which blocked the main entrance to the Canadian High Commission, was orchestrated by Greenpeace activists who oppose a multibillion-dollar pipeline planned in western Canada across indigenous lands."