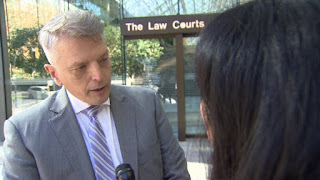 Global is reporting that "Two Vancouver-area police officers are being detained in Cuba for a criminal investigation involving a 17-year-old girl. Global News has learned that the teen has complained that one of the vacationing officers, a member of the Vancouver Police Department (VPD), assaulted her near Veradero. He and his friend, a Port Moody officer, were detained and eventually released from jail. The Port Moody officer is allegedly a material witness. Both the VPD and Port Moody officers have had their passports seized and they can't leave the country. The VPD has sent an officer to investigate."

CTV reported that "A former Vancouver police officer who worked with sex trafficking victims has pleaded guilty to sexual exploitation in a Surrey courtroom Wednesday. Constable James Albert Stanley Fisher plead guilty to two counts of breach of trust and one count of sexual exploitation for incidents alleged to have occurred between August and December 2015. Police Chief Adam Palmer told CTV News in 2016 that the alleged incidents involved a minor and an adult."