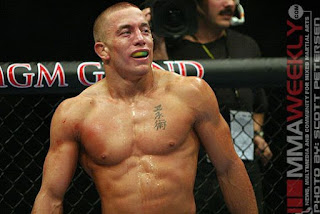 I've been watching a few interesting documentaries on famous boxers. The most recent one was about George Saint Pierre called Takedown: the DNA of GSP. I just want to say mad harsh respect to GSP. George is a real life role model. He is honest, humble and hard working. Those are the traits of nobility.

Recently there is even talk about yet another comeback. I hope he doesn’t fight Conor McGregor. That guy's day is done. He lost to Floyd Mayweather and his last absurd tirade was the nail in the coffin to his career. I won't watch him fight again no matter who he fights. Calling the brothers in the Rocky movie dancing monkeys was just not acceptable. Conor is the dancing money. Right now he can't even join the circus.

In the GSP documentary it really showed what kind of a trash talker Nick Diaz was. George was like you are the rudest person I have ever met and I'm going to kick your ass. Nick was like it got me the fight didn't it? Yes but he could of had the fight without the trash talk. Yet Nick does come from a challenging background.

At the end Nick showed respect and earned some respect from GSP. The movie had a Dali Lama quote by GSP about how your adversary shows you your weaknesses and makes you strong. Kind of like how in Kendo when opponents square off they bow and say onegaishimasu which means please show me the way (to enlightenment). By confronting your adversary you find yourself. Conor McGregor is different. He's done. He doesn't need anyone to put him in his place because he has already done that to himself.

In the GSP video there was a fan with a sign that said GSP for Mayor. Now that is something I could support. Both Pacquiao and Klitschko went into politics after their successful careers. If George did that he would be doing the world a favor. PM GSP. Two other documentaries I saw was about Manny Pacquiao and the Klitschko brothers. Not only did Manny become a senator but he too is making a comeback. Matthysse vs Pacquiao will be in Malaysia July 15th.

I have a huge respect for the Klitschko brothers from the Ukraine. CBC reported that Vitali Klitschko, became a parliamentarian in the Ukraine with his eye on a presidential run. Now that's what I’m talking about. He currently serves as Mayor of Kiev and head of the Kiev City State Administration, having held both offices since June 2014.

However, since Vitali Klitschko did some boxing training in Germany and his documentary is in German, it's pretty obvious he leans to integration with the EU. We need to remember that the other half of the Ukraine is of Russian descent and don't want to be part of the EU. That is the democratic will of the people.

Half of the Ukraine is afraid of Stalin and the other half is afraid of Hitler. For good reason. One is no better than the other. Both roads lead to the same place. Unfortunately, Manny Pacquiao is the same political party as the raging lunatic who is the current president of the Philippines telling everyone to shoot suspected drug dealers on site without a trial. That is both insane and evil.

They all talk about political corruption in the Philippines. What’s to stop a politician from shooting a political rival and say oh he was a drug dealer? What’s to stop someone from robbing someone then shooting them claiming they were a drug dealer when they were not. We do need to confront organised crime but you can’t do that by abolishing civil liberty and due process. Those are crucial rights we must always protect.

In the Pacquiao documentary it showed he did some pad work with Freddie Roach as did GSP. Freddie is very good with the hand pads. In his own words he was a boxer that didn't retire when he should have and now has Parkinson's disease like Mohammad Ali. Some people say Parkinson's is trauma induced, others say it's hereditary. Either way Freddie Roach is another world class legend along with Mohammad Ali who was without question the greatest. 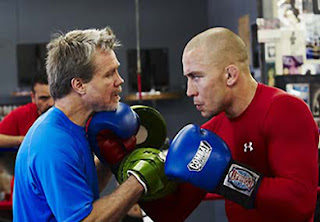 Mike Tyson was rock solid and did a fantastic fight scene with Donnie Yen in the movie Yip Man. 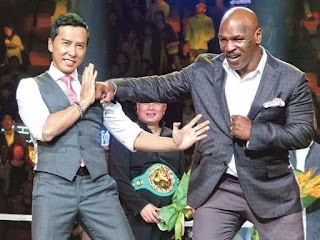 These legendary fighters still have a future in movies, training and politics.

Respect to the soldiers from the hood: Champs.

Mike Tyson and Evander Holyfield have my respect.

Hats off to Anthony Joshua the young gun from the UK. Took out Wladimir Klitschko respectfully. 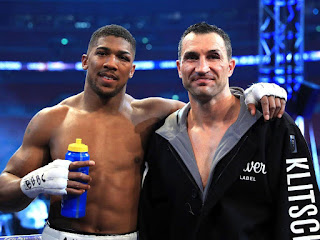 Olympic boxing should keep headgear like the Golden Gloves. It's a tournament where multiple bouts are fought right after each other. That's like playing hockey or football without a helmet. All the other contact sports are moving forwards towards protecting athletes and reducing brain trauma. The Olympics are moving backwards because the Olympic committee is corrupt.