Did the Hells Angels execute Reno Lee for a drug debt? 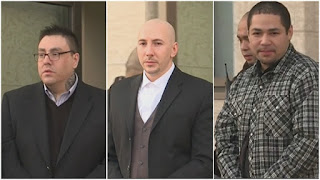 CBC reported that Reno Lee's death was an execution for a drug debt. The question is, who was the drug debt to? Who was supplying the drugs? David Giles said that if anyone uses the name of the Hells Angels for criminal activity, that activity has to be approved by the local executive. That implicates the local president just like in the murder of Bob Roth from Lloydminster.

Bob Roth was murdered and decapitated for a drug debt by the Whiteboy pose who worked for the Edmonton Hells Angels. Find out who the local president was at the time and you just found out who ordered the murder.

Reno Lee was killed in Regina, Saskatchewan and his dismembered body was dumped on the edge of the Star Blanket First Nation. Regina is half way between Winnipeg and Edmonton.

However, the Rock Machine rebirth in Winnipeg died out after mayor drug busts targeting them. That leaves us with the Edmonton Angels aka 51. The Edmonton Hell Angels are very proactive in expanding the drug trade. Edmonton Hells Angels were convicted of protecting the drug dealers that worked for them in Fort McMurray. The Edmonton HAs were responsible for the Whiteboy Posse. Dominic DiPalma was the Hells Angel responsible for the drug trafficking through the Whiteboy pose but he wasn't the local president. The local president was the one that approved the drug trafficking and approved Bob Roth's murder as well as Blake Christie's.

In Reno Lee's case, three men - 24-year-old Andrew Bellegarde, 33-year-old Bronson Gordon and 34-year-old Daniel Theodore - were convicted of first-degree murder. One of the three men, Bronson Gordon of Regina was arrested in Edmonton. Do the math.

Drug addicts aren't the most reliable people on earth. Giving them drugs for free then expecting them to come up with the money to pay for them afterwards is irresponsible. If you don't front drugs to addicts, there are no drug debts. However, people falsely accuse people of being a rat or owing debts all the time just like in the Britney Irving case. In the Surrey Six, Jamie Pigsh*t Bacon tried to tax Corry Lal on behalf of Gumby and the Surrey Girls.

Bronson Gordon was not present during the murder but recruited someone who owed him money to help collect the debt from Reno. CBC reported that "A homicide victim in Regina was introduced to one of his accused killers to broker a drug partnership, according to the testimony of one of the men accused of killing him. Gordon testified Lee came over to Gordon's apartment and brought meth. Gordon said he thought Lee's meth was of good quality, and he was looking forward to partnering with him. Theodore allegedly told Gordon that Lee owed between $40,000 to $60,000 to the guy in the suit when he explained what was happening. "

"When asked if Gordon was following orders from Theodore in April 2015, Gordon said it was a complicated thing and he did have to answer to him on some things because Theodore was collecting a debt." Lee had a crew. One addict who found out Lee was tapped up in the basement started getting tripped out because she knew that he was a boss. They were trying to tax him.

Happy Easter. Truth crushed to the earth will rise again so it will because no lie can live forever. 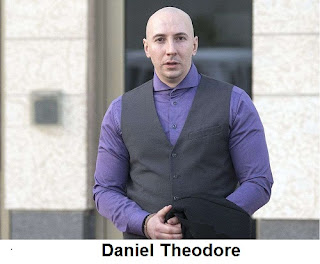 In 2009 CBC reported "A Regina man who ripped a woman's toe off with pliers was sentenced Wednesday to three years in prison for aggravated assault. Daniel Theodore, 26, pleaded guilty to the charge last week. Last July, Theodore and two women took the victim to the outskirts of the city and beat her over a $1,000 drug debt, court heard. After the beating, Theodore held down the victim, took off her shoes and socks and ripped off her baby toe with pliers."

Daniel Theodore was the one that decapitated Reno Lee's dead body.

This life is a test. Daniel Theodore FAILED. Miserably. He is D-ranged.

Native gangs in Canada either work for or against the Hells Angels. Redd Alert work for the HAs, Manitoba Warriors work against them. Bronson Gordon admitted he used to work for the Indian Poss who work for the HAs out of Winnipeg. He claimed he was working for La Familia out of Edmonton during Reno's murder. He is not Latino. Neither is Daniel Theodore. La Familia was just another name for another puppet club they picked after the WBP got bad press. La Familia in Edmonton was no more connected to the Mexican cartel than the WBP was.