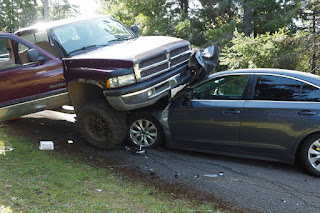 The Ladysmith Chronicle is reporting that some yahoo in a stolen truck rammed two unmarked police cars trying to flee police. The hillbillies got stuck ramming the second police car and fled the scene but were apprehended shortly thereafter.

The New West Record is reporting that "Thirty-two-year-old Majore Jackson and 47-year-old Andrew Bellwood have been charged with assault with a weapon, dangerous driving, possession of stolen property and obstruction." If they only had a brain.