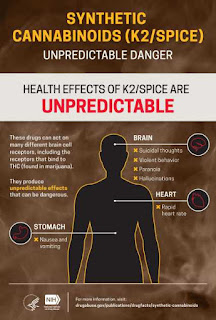 Kamloops this week is reporting that "A synthetic drug found in fentanyl in Kamloops is the same drug that led to a mass overdose event in Brooklyn in 2015 in which those affected were described as acting like zombies.

"Interior Health said the AMB-FUBINACA substance causes “speedy, trippy-like symptoms” with hallucinations. In high doses, users of the synthetic cannabinoid can appear to be having what looks like an opioid overdose, but will not respond to Naloxone, a medication that temporarily reverses the effects of an opioid overdose."

"According to the New England Journal of Medicine, the AMB-FUBICANA tested in Brooklyn in the summer of 2015 was 85 times as potent as the main agent in plant-grown marijuana — THC (tetrahydrocannabinol). Synthetic drugs like AMB-FUBICANA and K2 are made in labs and a world apart from natural cannabis."

A synthetic cannabinoid that turns people into zombies. Wonderful. Who runs the drug trade in Kamloops anyways? Why that would be the Red and White. That is why the compromised BC Gang Task Farce is WRONG for helping the Hells Angels maintain a monopoly on the market.