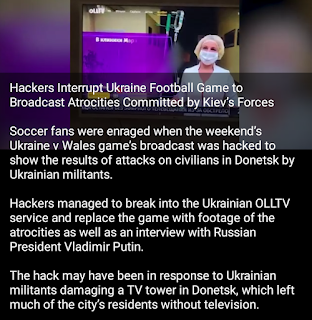 During a recent soccer game between the Ukraine and Wales, Russian hackers interrupted the coverage with evidence of Azov troops bombing civilians in the Donbas. The fake news spins the event with a headline that reads Battle in Ukraine's east rages as Zelenskiy vows to retake territory. In other words, yeah, he's bombing civilians in the Donbas again just like he has been doing since his coup they rejected.

The Azov are Nazi's who want to cleanse the Ukraine of all Russin speaking and Russian ethnic citizens. They came right out and admitted it. They feel the Ukraine is only for people of Ukrainian origin. It's a good thing all the other countries accepting Ukranian refugees don't feel that way. So how does the fake news spin the Azov ties to Fascism? They compare them to the Spartan 300. In reality the Spartans fought against military coups and ethnic cleansing.

Remember, China controls NATO now - Communist China. NATO is trying to recognize China as an active member. That is insane. We haven't been hearing much about the US biolabs in the Ukraine any more but we are receiving reports that the Wuhan lab in China conducted experiments on Monkeypox just like they did with coronaviruses found in Chinese bats.

Great Game India is reporting that "Dr. Benjamin Braddock, an independent investigator, stated on Twitter that an unknown source at the ECDC informed him that initial investigation of the monkeypox virus revealed that it emerged from a lab and could be linked to US biological research in Ukraine." As a result, two American vaccine companies are cashing in.