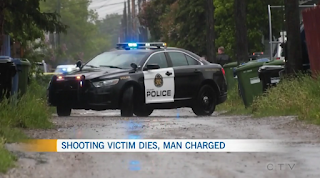 CTV is reporting that "A Calgary man faces multiple charges after a shooting Tuesday in southeast Calgary that left one person dead. At around 8:10 a.m., police responded to reports of a shooting on the 2200 block of 45 Street S.E. There, they located an injured man who was transported to hospital in life-threatening condition. On Wednesday, the man passed away. Officers were able to locate a suspect they believed was responsible for the shooting in the Erinwoods area and took him into custody." Sam Frank Barbera, 35, has been charged.
Posted by Dennis Watson at 6:47 PM