Ontario truck driver arrested in US with 60 kilos of cocaine 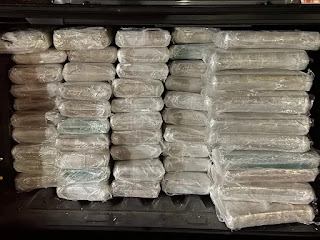 The National Post is reporting that "Two Ontario truck drivers were arrested on an Arizona highway after a state trooper stopped their 18-wheeler over an equipment violation and allegedly found $2 million worth of cocaine in the cab."

"Inside the sleeper berth in the cabin, the sergeant allegedly found 60 tightly wrapped and neatly stacked bricks, consistent with packaging of bulk cocaine. The load field-tested positive for cocaine, according to police. Police said the load weighed 60 kilos and estimated it to have a street value of US$1.9 million, which is equivalent to about C$2.4 million."