Fatal shooting in Oliver, BC 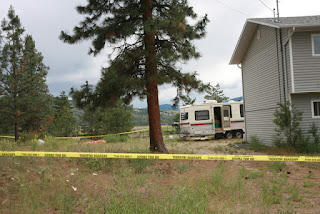 Castanet is reporting that "The RCMP Southeast District Major Crime Unit has been called to assist Oliver RCMP after a man was shot to death at a property on Osoyoos Indian Band land. Just before 4 a.m. on Sunday, officers from Oliver were called to reports of a shooting in the 1000-block of Pine Ridge Drive. Despite the life-saving efforts of an associate of the victim, the 61-year old man had died by the time officers and BC Emergency Health Services paramedics arrived."

Posted by Dennis Watson at 4:06 AM