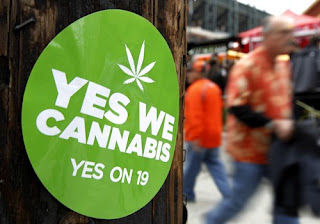 Well this vote was closely watched in BC. Tuesday voters in California voted on Proposition 19 which was a proposal to legalize small quantities of marijuana. 55% of voters were against it while 45% of voters were for it. Consequently it failed.

“There’s no way to reverse this. The momentum is on our side,” said Vancouver resident Jodie Emery, wife of activist and self-styled “Prince of Pot” Marc Emery, who is serving time in a U.S. prison for selling marijuana seeds online.

Yeah that's right. We're gonna keep re voting it until we get the answer WE want. That makes perfect sense in a democratic world. We want our rights, not their rights. I see. The results aren't very surprising.

Although we watched the results closely as the yes side did have a strong support base, it was hard to conceive that the State that just voted to ban gay marriage would vote to legalize marijuana.

What I see from this is that we need mandatory minimum sentences for selling crack or meth not for possession of pot. That would only make sense.