The Dark Side of the VPD 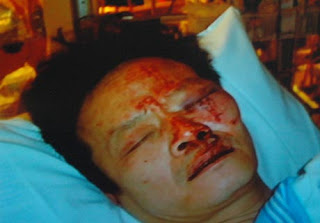 This is both sad and revealing. We were shocked when the police responding to a domestic abuse call went to the wrong door and gave the wrong guy the boots. We were encouraged when Jim Chu announced that he felt investigations into police misconduct should include public civilians. We were saddened once again when the Delta investigation into the incident proved to be a farce.

Now it appears the police are going out of their way to rationalize the Delta police's investigation with a bizarre story that just doesn't make sense. Proving that not only was the Delta investigation a farce but that something is very wrong with not only the process but with the VPD.

Without trying to burn every conceivable bridge possible I will clarify that there is not a doubt being a police officer is a very hard and often thankless job. Not every profession requires a person to put their life at risk every day. That is to be commended. As is the fact that there are more good people out there than bad and that includes Police. There are more good police than bad police. However, that doesn't mean we should lie for the bad ones or for the good ones who just make an honest mistake.

Today the Vancouver Sun ran an article showing that the police's version of events are very different from the victims version. Someone is lying. Let's give the police the benefit of the doubt for a minute and assume they aren't bending their version of events at all and are telling the truth. Their story is that they were responding to a domestic violence call. These kind of calls are dangerous and urgent. It is understandable that the police would have a sense of urgency finding the assailant and subduing him.

It's 2:25 AM. Two plain clothes police officers knock on the door. Without trying to distort the event one could conceivable visualize that the police banged on the door yelling open up, police!

So here we have a guy woken up out of bed in the middle of the night, groggy, to the sound of banging on the door with two frantic plain clothes police officers yelling open up police! My first reaction would be yeah right let's see some id. They flash a badge through the peephole and I'd be like what is that? Knowing full well that home invasions have occurred with people pretending to be police.

Let's give the police the benefit of the doubt. Let's say they did "identify" themselves as police banging on the guys door in the middle of the night by yelling open up police. My father once had a concern about police wearing balaclavas. He used to say that if he had a member of the emergency response team dressed in army fatigues wearing a balaclava hiding their face come pounding on his door yelling open up it's the police, "Like hell I'm opening the door. For all I know they could be terrorists."

I am of the understanding the ERT don't wear balaclavas any more which is a good thing for many reasons. The point is they were plain clothes officers banging on the guys door in the middle of the night. They woke him out of bed.

The other perspective is that it's an urgent situation. Someone has called 911 because they are getting assaulted. A delay in opening the door could mean the victim could die. The police are furious with the delay. When he finally opens the door they give him the boots for "not obeying their command."

Their claim that he pushed them just doesn't make sense. He delayed opening the door and they're pissed. That makes perfect sense. Now they have two reasons to give him the boots. First he's a wife beater. Second he delayed in obeying their command so they give him the boots. However, neither reason is just cause for the use excessive force and cave the guys face in. It wasn't just a mater of they took him down and he bumped his head which caved his eye in. No way. 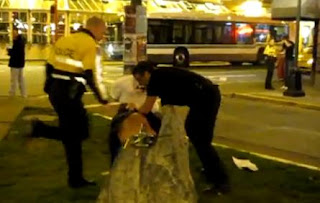 My point is, even if the guy was accused of beating his wife, they did not see it happen and they got the wrong door. Even if he delayed in opening the door, those are not reasons to give the guy the boots once he's down on the ground and we are told it happens all the time. That's not what John McKay taught them. That more like something Jeffrey Klassen would have taught them.

I got in an argument about police brutality with a protester from East Van once. They went on and on about Pivot's legal affidavit listing testimony of police brutality in East Van. I was like yeah right from a bunch of crack heads. Not very credible witnesses. He asked me if I would read it if he sent it to me. I said yes.

The first witness was an undercover RCMP officer. I was shocked. The RCMP officer was under cover and a couple of VPD officers yell at him for jay walking. He's under cover so he gives the cops the finger. They take him aside and beat the crap out of him. One of the officers was a boxer. True the guy shouldn't have fingered the cop but that does not give the police just cause to beat the crap out of the guy.

Reasonable force means you use physical force to stop an attack and subdue and assailant. Not to punish him by beating him up after the fact. Now I know there's small beef between the RCMP and the VPD which could include hidden agendas. Yet the fact that the first witness in their affidavit of police brutality was an undercover RCMP officer to me says that was a credible witness.

Which brings me back to the article in the Vancouver Sun. The police made a mistake. People do that. Apologize. Accept responsibility for your actions. Don't lie and deny it. That's like the RCMP saying they were afraid for their life when the guy they tasered at the airport was armed with a stapler. That doesn't make sense.

It's like Peter McKay lying and saying he never referred to Belenda Stronach as a dog when they were arguing in parliament when he was caught on tape. Think about it. Belinda broke his heart. They were in a relationship.

She lost the leadership bid to the Conservative party so she left early from a night out with McKay only to go and visit Paul Martin afterwards and make the stunning announcement the next day. She was breaking up with Peter McKay, she was leaving the Conservative party and crossing the floor to join the Liberals. McKay was shocked. 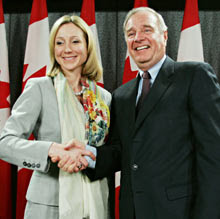 So they're debating the clean air bill and a back bencher from the liberals cat calls over to Peter McKay saying this clean air bill would be good for everyone. What about your dog he sarcastically shouts out. Then Peter McKay jokingly points to Belinda's empty seat now on the other side on the house and says "You already have her."

It was hilarious given what she had done. Why lie about it? Instead of admitting he said it and apologizing he denies he said it and everything's OK. Lying isn't OK. Stronach was named as the adulteress when Tie Domi's wife sued him for divorce. Ah but I digress. My point is we all make mistakes. Let's admit them and rise above them. Let's not lie about them and perpetuate them.

The VPD backing this bizarre story means there is something wrong other than two good cops making a mistake. The VPD appears at times to be an unapproachable and impenetrable old boys club that has been regularly accused of using excessive force on the disadvantaged. That's not even getting into the Woodwards Squat eviction. Don't get me started on that.

The point is simple. Jim Chu is right. Investigations of police misconduct need civilians from the public because the RCMP would be just as quick to cover up a mistake as would any other police force in the county.