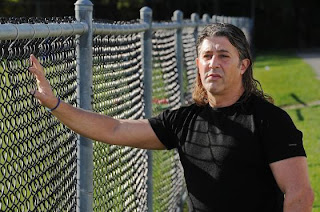 Yesterday the Vancouver Province ran a huge front page article with a two page follow up about a former Hells Angel named Joe Calendino. This is the guy that got one day in jail for selling crack.

Seemingly he is no longer addicted to crack and the police have him speaking to High School students about gangs. Normally I'd say this is a great thing. Him overcoming his addiction to crack is fantastic. However, I am somewhat concerned about how he's not being completely honest with the kids. He can't be. If he was honest with the kids, he'd be dead.

The article claims Joe used to be a full patch member of the Hells Angels and that the drugs, his erratic behaviour and a nasty incident in a Kelowna casino had earned him the boot from the bikers.

Here we have a few misconceptions. True the Hells Angels don't like their dealers using too much of the product. Just ask the Lennoxville Massacre about that. True they don't like erratic behaviour that generates bad press. Just ask Juel Stanton about that.

However, the bottom line is that he was a patch member and he was arrested for selling crack cocaine to an undercover cop near a SkyTrain station. Kinda confirms what I have been saying about the Hells Angels being in charge of the crack that's sold at Surrey Central. Only I said they had puppets sell it for them not patch members. No wonder he got in trouble.

I'm concerned with the false image this guys gives kids about the group. The Hells Angels profit from the sale of crack. There is no question about that. To say he was kicked out of the Hells Angels for selling crack is absurd. James Coulter I see as trustworthy. He's not giving the false impression that the UN doesn't sell drugs.

Then there was the casino incident he claims he was famous for. Here we have a big guy who gives a smaller guy the boots for no reason with the help of his friend. This is what gang members do. Despite their size and martial arts they don't fight one on one. They are bullies.

I appreciate the fact that he went to rehab and got off the crack. I respect the fact that he was reunited with his family and took some University courses. However, many lawyers for the Hells Angels went to University and it's hard to respect that. I do respect he's working with the Odd Squad from the VPD which the VPD Ninja is also involved.

I'm just very concerned that impressionable kids are given any information that would lead them to believe that the Hells Angels are anything but another gang that sells drugs and commits murder indiscriminately. Nevertheless I wish Joe Calendino well and hope "the boys" leave him alone.