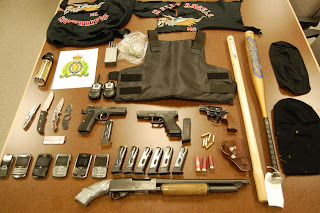 Did ya see the cover of the Vancouver Sun today? It was a special on the Hells Angels. The Vancouver Province ran the article too. Four men linked to the Kelowna Hells Angels are expected to appear in a Salmon Arm court this week after the RCMP found a cache of weapons during a routine traffic stop Thursday night.

The police found a large cache of weapons in the possession of four Hells Angels when they pulled them over for speeding. The officer smelt marijuana which was just cause for a search of the car. Only our brain dead judicial system will likely say the search was in violation of their charter right and let them go free again. The charter doesn't give them the right to speed after smoking a blunt with a cache of firearms in their vehicle.

Note that these "patch" members were driving a car not riding a motorcycle. The items seized included several firearms, including a sawed-off shot gun, a large quantity of ammunition, and three handguns. There was also bullet-proof vests, balaclavas, a baseball bat, an axe handle, knives, bear spray and a radio jamming device designed to block outgoing transmissions.

Skreptak is a former member of the East End Chapter who was one of the first to move to Kelowna to set up a "charter" of the notorious biker gang there. That chapter formally opened in the summer of 2007.

Keane said all four arrested were "sporting insignia of the Hells Angels organization."

East Vancouver chapter members living in the Kelowna retirement village starting shit all over the province. What are we supposed to do? We either take up arms or lobby the government to enforce the law because they are not doing it in BC. Just ask McLean's.

They had guns. They were wearing Hells Angels colours. This wasn't just four men. The Hells Angels as an organization need to be tried with the firearm violation. This was not the first offence for that organization in BC. Randy Potts was found with six guns, four silencers and four grenades. The entire organization should get a lifetime firearm ban that needs to be enforced.

Just out of curiosity, let's speculate what on earth four Hells Angels could possibly have been doing with guns, ammunition, bear spray, bullet proof vest, cell phone jammers and balaclavas. You would think with that kind of arsenal they'd be off to rob a bank. Someone posted a comment on one of the news reports and said they must have been on their way to rob a grow op. What else would they be using the cell phone jammers for? I'll admit it's an interesting theory. Certainly more likely than they were off to rob a bank.

Kelowna Hells Angel Joseph Skreptak is now also facing charges of aggravated assault, assault, uttering threats and breaking and entering to commit a criminal offence in regards to an assault which took place at a Kelowna residence.