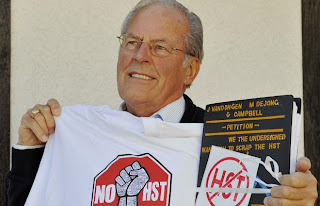 Well let's give credit where credit is due. Bill Vander Zalm is a hero. Champion of justice Libby Davies said Campbell's fate was sealed by the unpopular Harmonized Sales Tax.

Campbell's party said during the 2009 election that it would not impose the tax, but did so anyway two-and-a-half months after re-election. A petition led by former Premier Bill Vander Zalm has forced a Sept. 24, 2011, referendum on the tax.

"This is a core issue in British Columbia — people are not going to forget about it," Davies said. "It is about democracy, it is about the trust of the voters. It was betrayed by Gordon Campbell and it is being betrayed by the Harper government.”

There are several points I'd like to make and most of them relate to where we go from here. Over a month ago a coworker and I were discussing the momentum of the anti HST petition. He commented that he had heard Rita Johnston is coming back as leader of the Conservative party in BC. Rita Johnston? I shuddered at the thought. The vision of her and Harcourt mudslinging each other with Gordon Wilson pointing out that is why nothing gets accomplished in Victoria is sealed in my memory.

I have nothing against her being a woman. I think Carol James is a sound leader. I'm just leery of the mudslinging polarized politics that BC falls prey to. We need to stop jumping from one extreme to the other in heaping scandal upon scandal for an increasingly disillusioned public.

Bill Vander Valm's Fantasy Gardens scandal wasn't that big of a deal. Bill Vander Valm was a successful businessman. You want someone in charge of your tax dollars who is good with money. The Fast Ferries scandal wasn't a big deal. If the Fast ferries worked it would have been an awesome boost for our local economy. Both parties exploit scandals and try to blow them out of proportion for their own political gain.

My point is, Bill Vander Valm did a colossal job organizing the anti HST coalition. Think about it. Getting all those signatures on a petition for the sole purpose of holding a nonbinding referendum was pointless. We spend all that money on a nonbinding referendum, the public says no but it's nonbinding so Campbell's government proceeds unilaterally.

Vander Valm's strategy was brilliant. He wanted to put political pressure on Campbell and his entire party. He didn't want to waist money on a nonbinding referendum that wouldn't tell us anything an Angus Reid poll hasn't already told us. He said he wanted the government to put the issue to a free vote in Parliament so the voters could see who supported it and who didn't. Then he announced they were going to start recall campaigns one by one in Liberal riding's until the tax was repealed. Brilliant!

Now there is no doubt Carol James and the NDP would have ran their own anti HST campaign which they did, the same time as Vander Valm. Together they were successful. I would totally support a Bill Vander Valm Carol James coalition forming the next BC government. We need sound balanced finances along with the self respect that cares for the elderly and disabled not exploits them to get rich. This would be good for BC and the rest of Canada.

Of course I would totally support Diane Watts stepping up to the plate and joining the coalition. She is awesome.