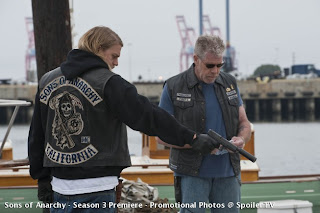 I'm like what the hell is that? Sons of Anarchy is a freaking TV show. It was the same name but the bottom rocker said British Columbia. OK maybe the guy just had worked on the set and was wearing a hoodie from the TV series. Surely you wouldn't have a grown man wearing a patch for a new puppet club named after a TV series. That wouldn't even be mid life crisis that'd be just plain dumb.

Posted by Dennis Watson at 1:14 AM