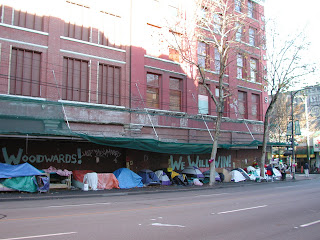 Affordable housing is a huge concern in Vancouver. Many on the right are afraid of the word social housing. I am not. The idea behind renting a flat for one third of your monthly income is a good one. Welfare rates aren't enough to live off. That is why so many people live on the streets.

The working poor are in the same situation. Minimum wage has been frozen for many years but that's just the tip of the iceberg. Wages have changed. Look at the grocery industry. Woodwards in Guildford used to sell groceries. Now huge grocery chains like Safeway and Save on Foods have changed. Superstore came in and under sold everyone so everyone had to take huge cuts. Now if you work in the grocery industry you make a lot less that you did 15 years ago yet the cost of land and housing has increased significantly. Times have changed and it hasn't been for the better.

I met a guy from England yesterday. I have some ancestors that came from the same part of England as where he was from. They came over on ships to Canada in the 1700's. On the passenger list their reason for leaving England and coming to Canada was the same as most other passengers on the ship. Taxes and rent were too high so they came looking for a better place to live. I joked about how we are now seeing ourselves in the same situation with taxes and rents being so high only we have no place left to go.

In England you have more squatters rights than you do here in Canada. Instead of owning land in England it is more common for someone to buy a 100 year lease on a home for the same price. The only difference is that when the lease expires you can't leave your home or land to your children as an inheritance. As a result, in London there are many abandoned buildings. Since homelessness was a big problem there too, the slogan was don't let houses rot, squat. It kind of made sense. The Crown had all these abandoned buildings no one was using. If someone wanted to move in they could. Until the owner got a building permit and was ready to do something with it.

Such was the case with the Woodwards Squat. The old Woodwards building hadn't been used for many years. A group of people decided to move in while they were waiting around trying to decide what to do with the building. Those people were physically evicted from the building and forced to camp outside on the sidewalk. 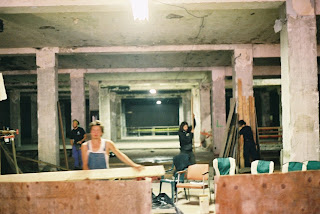 The rains came and the sanitary and health conditions of the outdoor squat began to deteriorate. Then they said it was an eye sore and were preparing to move in and crush the crowd. That was when the ruthless NPA were in power in Vancouver City Hall who adapted the policy of kicking the homeless out from under bridges and stealing their personal belongings. Three cheers for First United in providing storage containers for the homeless.

The NPA were wiped out in the next civic election and Larry Campbell, Vancouver's own da Vinci saved the day. His response was far more compassionate and far less confrontational. He said they were going to find housing for the squatters before they dispersed them and moved them all on. I will clarify that they were physically removed from the squat in the very beginning and forced to camp outside on the sidewalk which isn't really a squat.

Nevertheless Larry Campbell was to be commended for having the decency to help the homeless. Unfortunately, Gordon Campbell's huge cuts to pay for his huge raises and pension have seen homelessness rise exponentially.

The point I'd like to make is a simple one. When reading over some statements from the squatters I recently saw an affidavit that said the squatters weren't just being harassed by the police. They were getting it from both sides. The drug dealers across the street were complaining about their presence and wanted them moved because the squat was reducing their sales.

"Drug dealers across the street, on Hastings, insist that they are losing $2000-$5000 per day in the trade of crack cocaine. If this was true it would lend credibility to the remark made by Jon Stovell, president of the "Gastown Business Improvement Society," that area business is suffering. This morning dealers attacked members of the squat kitchen crew in an attempt to steal food. Additional support from the community is required during the early morning hours (midnight-8am) to ensure safety at the squat."

Larry Campbell did wonders in raising the bar for humanity by showing a little compassion for the homeless. He promoted the Four Pillars. Others exploited that program and turned it into a one legged horse by only using one pillar and completely ignoring the other four which made the program fail miserably.

Enforcement is one of the four pillars. You can't have harm reduction if you don't have enforcement. That doesn't mean beating up the addicts. It means arresting the dealers. Yes it's frustrating to see the dealers get out of jail so fast in our revolving door judicial system. Yet al lit takes for evil to triumph is for good people to remain silent and do nothing.