The NPA are Cruel 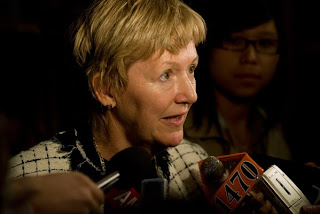 Speaking of the NPA, here we have Vancouver NPA Counsellor Suzanne Anton spewing more hate and intolerance. Don't you just hate it when the opposition complains about everything? Sure that's their job but come on, everything?

The Olympics was a wonderful event and a huge success. I was skeptical at first and likely would have voted no to holding them in the referendum had I been given the opportunity to vote. The key point is that Larry Campbell from COPE did hold a referendum within his jurisdiction. The City of Vancouver by the voice of the people chose to hold the event.

Concerns were raised about costs and expenses. Some found cutting public funding for youth sports somewhat contradictory to the Olympic Spirit. Nevertheless, I'd have to say it was the Smurfs, the army of cheerful volunteers, that made the event possible. So now we have this wonderful legacy of the Olympic experience. Everyone wants to hold on to and rekindle the Olympic flame of nationalism that was out poured on the streets.

I remember everyone dressed with flags as capes singing the national anthem and saying to my daughter, ya know if this was Americans doing this, everyone would be complaining. Yet it didn't matter because the experience was magnificent. Why not continue that Olympian effort and reach out in the spirit of tolerance and inclusion?

Why douse the flame with hate and intolerance? Why?

The Olympic village was the source of controversy for the money that was spent on the media. After all, isn't the media supposed to pay for broadcast rights? That's what advertising is for. Nevertheless, what's done is done. There was a large public outcry to turn the village into social housing. Wishful thinking perhaps but it was a noble idea.

So here we have Vancouver Mayor Gregor Robertson announce that the city council has decided on a compromise that will see some of the units go to social housing. Some is better than none. They approved a similar proposal for Vancouver’s American Hotel in East Van.

Well a compromise isn't good enough for the NPA. They want to eliminate all social housing once again just like how they were kicking the homeless out from under bridges and stealing their few personal belongings when they were in power before Larry Campbell restored dignity to the City of Vancouver.

Suzanne Anton claims that the decision of city council is undemocratic. Well last I heard the Mayor only had one vote and if he is sitting as the chair he only gets to use it to break a tie. So what is undemocratic about a decision made by an elected body? Oh they didn't do what the NPA wanted. That makes it undemocratic.

Obviously I don't agree with every position of any political party but I think Vision Vancouver has a vision. The NPA don't. The NPA are heartless and intolerant. Vision Vancouver rising to the challenge of finding a healthy and compassionate compromise is not only Canadian but champions the Olympian Spirit.

Don't forget, we hosted the Paralympics right after the regular Olympics. We cheered on the Paralympians and welcomed them to our city in the spirit of Vancouver's own Terry Fox. The NPA now tells us that allotting some units of the Olympic village to social housing is a waste of taxpayers money. Some would argue the Olympics was a waste of taxpayers money. This was a healthy compromise.

Please don't insult our intelligence with the ridiculous misconception that the social housing units will be full of pimps and drug dealers. If tenants break the law they will be evicted. Are you saying we are too proud to share our city with anyone who is mentally or physically challenged or with anyone who is poor? Shame on you Susan Anton and the NPA. We are better than that. We are human and proud of it.

Thank God for Vision Vancouver's ability to find compromise and balance. That is the Olympian Spirit.

Think about it. The French version of the Olympic theme song I Believe is called J'Imagine. Yet the French verb for I believe is je crois. Instead they chose the term j'imagine for the translation which really means I imagine which is the first step towards believing. I imagine a tolerant society. I can visualized it. Then take a few more steps and I believe it. Je crois parce que je l'ai vu dans mon imagination. Thank God Mayor Robertson has vision. 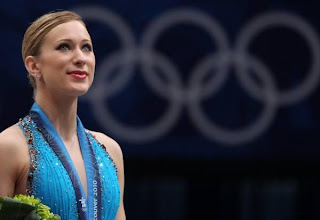