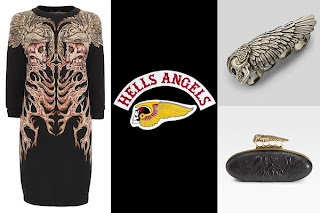 The Hells Angels are suing Alexander McQueen over a trademark violation. The suit alleges that Saks and Zappos - without the motorcycle gang's permission - have been selling Alexander McQueen items including: the "Hells Angels Jacquard Box Dress" ($1,565 US), the "Hells Four-finger Ring" ($495 US) and a handbag ($2,329 US) and silk scarf ($560 US) that incorporate what the Hells Angels Motorcycle Corporation alleges are also trademark-protected symbols.

The logo on the dress is very different. Lets take a minute to look at the real logo and see what is and what isn't a copyright violation. Do the Hells Angels own the copyright to the image of a skull? No. The skull has been used as a logo prior to the Hells Angels from pirates to poison warning labels.

We know the Hells Angels sued Disney over it's movie Wild Hogs. A Tim Allen comedy about the tool man running into a group of bikers. Even in that application counsel for the applicant admits the Hells Angels logo is that of a helmeted, horned and feathered skull. (Paragraph 6)

Interesting to note that Disney changed the name of the biker gang Tim Allen encountered in the movie but that it was originally meant to represent Hells Angels. Consequently there is a good moral to that movie.

Interesting to note that Quebec lawyer Jacques Leger had represented the Hells Angels in a trademark claim and was appointed by the Conservatives to the Supreme Court. Turns out that he was the former president of the Conservative party. Go figure.