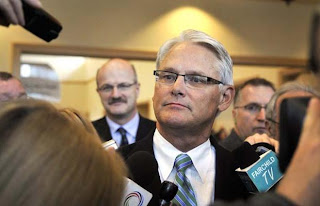 B.C. Premier Gordon Campbell is stepping down and has asked his party to hold a leadership convention. Campbell made the announcement during a surprise news conference Wednesday morning in Vancouver, accompanied by his wife and children. Praise the Lord Tony. Oh Happy Day!

How does it feel to be on the other end of the scape goat Gordo? Stephen Harper sang Gordo's swan song. He was the one that put the nails in Campbell's coffin. He was the one that convinced Campbell to unilaterally drive ahead with the HST regardless of the democratic will of the people.

"On behalf of the Government of Canada, I would like to thank Premier Gordon Campbell for his devoted service to British Colombians, and indeed his service to all Canadians. Through his considerable efforts, Premier Campbell has returned British Columbia to prosperity and has re-affirmed his province's rightful place in the heart of our Canadian Confederation.

"In particular, I would like to thank Premier Campbell for his steadfast support during the current global economic downturn and for his government's tremendous cooperation in implementing Canada's Economic Action Plan."

Stephen Harper didn't have an economic action plan. His response was let the market ride it out, it's not the government's job to create employment. There is nothing wrong with that response. It was the opposition parties that demanded he start spending money or they would assume government with a coalition so he caved in. We need to rise above pork barrel politics. That is why we keep raising taxes. To pay for the pork barrel promises to the lobbyists that donated to their campaign.

The HST is Harper's Economic inaction plan and Gordo was quick to jump at the opportunity to implement it. Some suggest he did so on the promise of a seat on the Senate. What an abomination that would be. Making a former premier with the lowest approval rating in Canadian history a senator. What will Harper do next? Make his idol Brian Mulroney a senator? That has about the same merit.

Gordon Campbell did not return British Columbia to prosperity. That is offensive. He robbed the elderly and mentally challenged and gave himself two huge pay raises and a gold plated pension. That will be my enduring memory of Gordon Campbell.